Playing in a single group, every pair played every other pair in matches consisting of the best of 3 games to 21 points with no setting using the rally-points scoring system. Starting scores in each game were determined according to the following rules for calculating handicaps.
Each pair is awarded 1 point for every 2 years by which their combined age exceeds 80. Then additional points are added according to the division the players are in, with 2 points per player in Division Two.
The handicaps were then reduced equally until one pair is on zero. If the other pair still has more than 14 points, then the handicaps are further reduced until 14 is reached, the other pair therefore becoming negative.

Positions were determined according to most matches won. If there was a tie between two pairs, then the result of the match between them would determine position.

Stephen & Helen played the most games overall because they kept going to 3! At least they were victorious in them all after the effort expended. However, they lost the crucial matches against Lester & Sandy and Barry & Kerry in straight games.

Dave & Liz Osborne, defending their title, won only one match, against Paul & Sue. The handicap against the older competitors proved too great an obstacle to overcome.

Barry & Kerry, with the most severe handicap due to their tender years, won all but one of their matches, losing to Lester & Sandy.

Paul & Sue were disappointed not to win at least one match, and came closest against Stephen & Helen. They did however take a game off Barry & Kerry, the only pair other than Lester & Sandy to do so.

Lester & Sandy were unlucky not to finish higher. They beat Barry & Kerry and Dave & Liz, both Division One pairings, but lost out against Eric & Gill in the match that ultimately robbed them of the title.

Eric & Gill beat all-comers except Barry & Kerry. As the oldest competitors, they managed to keep the games short, never needing to play a deciding 3rd game that could have spelt the end for Eric’s legs!

Congratulations to Barry & Kerry and to Eric & Gill who won the most matches (four each). The final positions were decided by the result of the match between them, which gave 1st place went to Barry & Kerry.
Third place went to Stephen & Helen who finished level with Lester & Sandy (three wins each) but took the position due to the result between them.
Fifth spot went to Dave & Liz who were unable to repeat last years feat, and finally Paul & Sue proved to be the strongest pair as they hold everyone else up!

Thanks to everyone who participated, and to Phil Winton for organising it on the night. 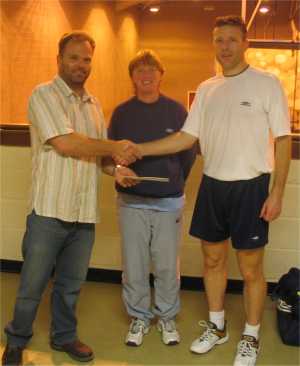 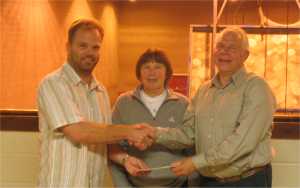