Playing in a single group, every pair played every other pair in games to 15 points with no setting. Starting scores in each game were determined according to the following rules for calculating handicaps.
Each pair is awarded 1 point for every 3 years by which their combined age exceeds 80. Then additional points are added according to the division the players are in, with 2 points per player in Division Two, and 4 points per player in Division Three.
The handicaps are then reduced equally until one pair is on zero. If the other pair still has more than 10 points, then the handicaps are further reduced until 10 is reached, the other pair therefore becoming negative.

Unfortunately 2 pairs had to withdraw before the tournament began, reducing the entry to only 6 pairs. However, everyone who played enjoyed the evening and some close games ensued.

Ron Fawcett & Brenda Jones, with the advantage of a superior handicap, fought but ultimately lost close matches against Cliff Aston & Julie Hillier and Dave & Liz Osborne. Meanwhile Dave & Liz had a storming game against Steve Titchard-Jones and his partner Julie Nash, which Steve & Julie just won. Peter Campbell and Dee Trott had some good games but were always fighting an uphill struggle against the older pairs, while Barry & Mandy Greenham had some really close scorelines, but kept getting stuck on 14, never quite managing to get that elusive and critical extra point.

It looked as though Steve & Julie were on course for an outright victory until they played Ron & Brenda in their final match. Ron managed to fight off a sore shoulder and they succeeded where everyone else had failed, and with no pair having won all their matches, a final was called for.

The final turned out to be a repeat of the earlier matchup between Steve & Julie and Dave & Liz Osborne. Another tremendous battle was fought, with Steve & Julie opening up a 10-3 lead in the first game, before Dave & Liz clawed their way back into the game, eventually overhauling their opponents to win 15-14. The second game went the same way, with Steve & Julie initially racing away to 10 points, but then they started making a few too many errors, and once again Dave & Liz clawed their way back. The final score of 15-14, 15-10 was a reversal of the match in the group, and a tremendous match to watch.

Third place overall went to Cliff & Julie, who won the same number of matches as Ron & Brenda, but crucially won the contest between themselves. 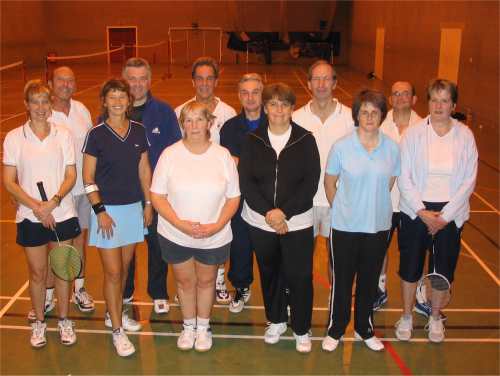 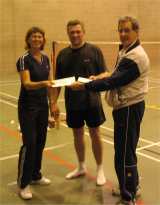 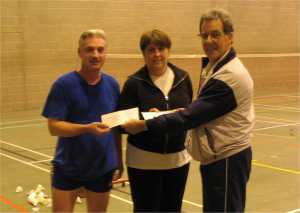