Due to lack of entries, the Division Two tournament had to be cancelled.

The Division One Tournament consisted of two groups, with pairs playing all of the other pairs in their group. The top pairs in each group played semi-finals with the winners contesting the final and the losers contesting a 3rd-place match. The pairs finishing 3rd in each group contested a 5th-place play-off and so on down through the groups. Thus every pair played at least one pair from the other group in a head-to-head to determine their overall finishing position.

All games were the best of 3 games, with setting, using rally-points scoring. Group rankings were decided by the pair winning the most matches.

Here are the details...

Peter & Kelly Fairey won all their games in Group A fairly comfortably to book their place in the semi-finals. They were joined by Paul Ormes & Denise Thomas who had a scare against Andy Bentley & Jane Lipton but finished in 2nd place.
In group B both Mark Yeandle & Debbie Gould and last year’s winners Barry Harriss & Fiona Dennis won all their matches with ease, so the only decision was who would come top and avoid Peter & Kelly in the semis. A close 3-setter went eventually to Barry & Fiona.
The semi-finals went to form although Barry & Fiona struggled against Paul & Denise.
The final was fought between the two Yeovil pairs and was deservedly won by Peter & Kelly who didn’t lose a game throughout the day. Barry & Fiona had had a couple of tough matches to reach the final and although they fought hard in the second set could not hold on to their trophy.

A mention must be made of the 7th-place play-off match. Still on court long after all other matches had been completed, the final set of this epic went to Dave & Liz Osborne who beat Andy Bentley and Jane Lipton by the truly staggering score of 30-28 which is the highest recorded in the league since the adoption of rally-points scoring. 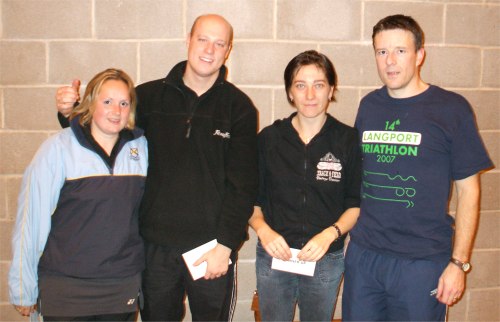