Each of the tournaments consisted of two groups, with pairs playing all of the other pairs in their group. The top pairs in each group then contested a final, the second-placed pairs contested a 3rd-place play-off and so on down through the groups. Thus every pair played at least one pair from the other group in a head-to-head to determine their overall finishing position.

The decision to use the rally points scoring system caused a few headaches early on, and quite a few discussions were evident on court as players got to grips with the new scoring system. However, as the evening wore on and everyone got more used to it, the games seemed to flow more freely. Certainly it led to some close finishes in a number of games.

The group games went much as anticipated, with Fiona Dennis and Barry Harriss from Yeovil Graduates winning 5 out of 6 games in group A to finish top ahead of Emily Witham and Matthew Hillman from Weymouth Falcons.
Group B saw another Falcons pair, Debbie Gould and Andy Wakely, unbeaten, although they did have a scare against Ruth Richards and Liam Cordery.
A close fought final saw the Yeovil pair victorious in straight games.

With each match-up consisting of only a single game, there was no room for any mistakes in the Division Two groups. Group C saw Janet Martin and Allan Potter (North Dorset) win all of their games (just!) to finish top. Behind them, 3 pairs managed to win 2 games each and so group positions had to be decided on points scored, with Jo Ray and Kevin Stenlake from Budmouth just pipping the pairs from Wessex Wanderers.
The other group saw another Wessex Wanderers pair, Jo Searle and Mike Read, beat everyone to finish ahead of Dorchester youngsters Charlotte Moore and Craig Swann.
The final was a tense and close affair, with Jo and Mike just holding on to be victorious.

Note: Because 3 pairs finished with the same number of games won, group positions were decided on the total number of points scored overall.

Last year’s winners, Sandy Sheldon and Lester Cawley, proved too strong for the other pairs in group E. But the Charmouth pair did lose one game at the hands of Emily Greenham and Dave Oldridge, and these may have been the decisive points that helped the Crewkerne Hermitage pair to claim 2nd spot in the group. Tying for the runner-up spot with another pair, and with the games between the two pairs being dead even, the position went to the pair that had scored the most points overall.
The other group saw the sole entrants from Cerne Abbas, Angela Head and Paul Boggust, win all their games to finish top. The battle for second spot hinged on the result of the match between two pairs who otherwise finished with equal records, and although the games had been shared, Bridport couple Jan and Dick Stevens scored more points.
The Division Three final was the only one to go to 3 sets, and a 21-19 score in the last game in favour of Sandy and Lester shows how well-matched the pairs were.

Note: Because 2 pairs finished with the same number of games won, and the result of the games between them were identical, group positions were decided on the total number of points scored overall.

Note: Because 2 pairs finished with the same number of games won, the result of the games between them was important. Although the games were shared, group positions were determined by the pair scoring the most points in those games. 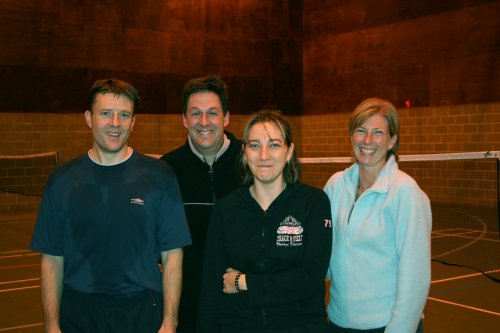 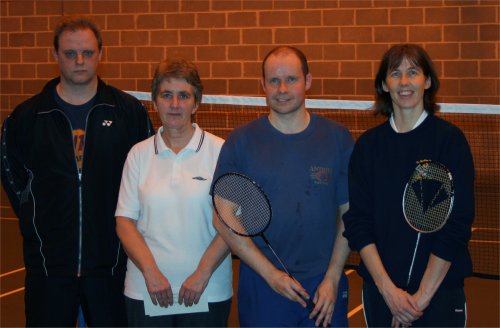 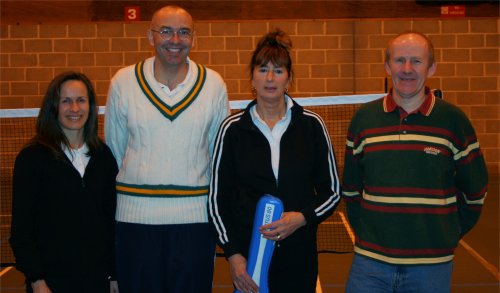